方小姐現在是歌唱導師，網站有這段可能是用google translate譯的英文介紹 :
Cindy (方麗盈)
'The sad rainy day'(傷感雨天), the first song which have introduced, Cindy Fong to Hong Kong audience, since then, everyone in KTV could sing a few lines of this song. Cindy was raised in a musical family. Her mother was a singer too, her performance life started when she was teenage which her mom had trained her to become a MC and singer, so could participate to mom's show business. With a little luck, her singing potential had discovered by a musical producer who had invited her to make her first personal album. “The sad rainy day”(傷感雨天) is the title song of this personal album. Two year later, her second album named “Please don't go”(不要走) and she had also featured in the “Please don't go”(不要走)MTV karaoke. Both 'The sad rainy day'(傷感雨天) and the 'Please don't go'(不要走) are still the favorite songs of most DJ in Hong Kong radio stations, and which have broadcasted frequently. At present, her singing skill and personal style well developed. On stage, she was told that she is not only an excellent singer, but she also an excellent Master of the ceremonies. Behind the stage, she do have participate in events producing work and teach student singing skills. Recently, she has accompanied her sister, Wendy, formed as the " Tall Twins " group and they have perform regularly at famous hotels and music lounges. 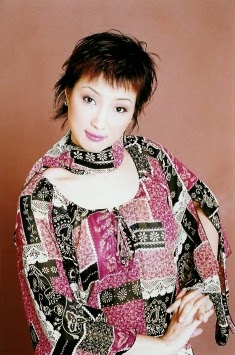